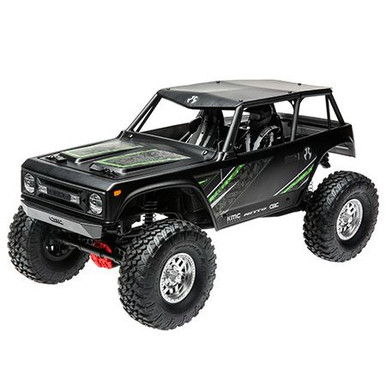 The latest RC crawler from Axial is the Wraith 1.9 4x4 RTR. With a combination of outstanding scale detail and enough onboard rock crawling technology to handle just about any terrain, the Axial Wraith should be on your radar if you are an RC truck or crawling enthusiast.

More Dirt, More Mud, More Action! Axial Racing Wraith 1.9 4WD Off-Road Adventure | RC Driver (09:07)
The Axial Wraith 1.9 is certainly proving to be a fun RC Off-road rig in our minds. We’ve been running the radio control truck in our backyard often. But when we were recently on a video shoot where we had the opportunity to drive on a much more exciting terrain, we set out to get some more action footage of the Axial Wraith 1.9 doing it’s thing. This video is loaded with action, most in slow motion so you can see how this RC rig reacts on the terrain. In this video the truck was run on a 2S LiPo battery and still had what it took to tackle some rough terrain. Looking to sit back, relax and take in some cool RC action? You’ve found the right video. Enjoy! PRODUCT FEATURED Axial Wraith 1.9 By: Horizon Hobby Part Number: AXI90074 Price: $369.99 Link To Buy: https://amzn.to/2CMmXkw RC DRIVER SHIRTS & MERCH: https://teespring.com/stores/rc-driver-swag-store RC GEAR WE USE: https://www.amazon.com/shop/rcdriver_online Don’t Miss A Thing! Follow Us: Subscribe: http://bit.ly/SubToRCD Website: http://bit.ly/VisitRCD ▶ Check out my gear on Kit: https://kit.com/RCDriver_Online *Notice: Some of our articles, videos and descriptions may contain affiliate links or coupon codes, which means that if you click on or use one of the product links/ codes, we may receive a small commission. This helps support the website and social media channels and allows us to continue to produce content. Thank you for the support! #AxialRacing #AxialWraith #RCDriver