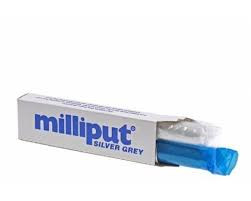 The epoxy Putty with a thousand uses in modelling D.I.Y. and industry.

Established in 1968, Milliput is one of the world's leading producers of epoxy putties.

Milliput remains a family run company committed to manufacturing a high quality product. We pride ourselves on that our products are manufactured and distributed from our premises in Wales to over 35 countries worldwide.

Milliput can be used for repairs on many types of materials including metals, plastics, masonry, wood, glass and ceramics and can be used in places where welding is impractical.

The Most Versatile Material Available. It is:

Keep a pack of Milliput in your tool box for those urgent emergency repairs.

Milliput is the trade name for our epoxy putty. We produce five grades: Standard (Yellow/Grey), Terracotta, Silver Grey, Black and Superfine White. Each grade is presented in similar packs containing 2 x 56•7gm. sticks and the general instructions for preparation and usage are the same.

Once equal quantities of each stick have been mixed the resultant putty is at first soft and highly adhesive and then gradually hardens. Speed of hardening is dependant on temperature and at normal temperatures (20-25 deg C) Milliput becomes rock hard in three to four hours. By the application of heat the setting time can be reduced.

After setting hard Milliput continues to cure and is fully cured after an elapse of time equal to the setting time at the same temperature. Once fully cured Milliput can be machined, drilled, tapped, turned, filed, sawn, sandpapered and painted.

Milliput is an excellent adhesive and will bond any of the following to itself or to any of the others - wood, brick, cement, metals, concrete, plastics, glass etc, but note that Milliput is not intended as a thin layer adhesive. Milliput will set under water and is heat resistant up to 130°C.

Mix together equal parts of each stick from the pack. Knead and roll in the hands for at least 5 minutes until the colours merge and become uniform and no streaks can be seen, and then mix for another minute. The surfaces to which the putty is applied should be free from grease and dirt. Smooth surfaces should be cleaned with a suitable solvent or with soap and warm water to remove dirt and grease. Abrading the surface will improve adhesion. the putty may now be applied and will set hard in three to four hours without shrinking.

At all stages from initial mixing to final setting Milliput responds to the use of water. To aid manipulation and avoid sticking, fingers and tools should be kept moistened with water. There are certain instances when work may be carried out in a gentle stream of water under a tap. To obtain a smooth finish, mould or apply Milliput and then immediately wipe and smooth gently with wet finger or with a fine textured moist cloth.

When tools have been used for applying or contouring Milliput they should be cleaned immediately after use. If the putty is allowed to harden on it will be almost impossible to remove.

In the putty state Milliput, like most chemicals in domestic use, may cause irritation to sensitive skins. When mixing the two components it is advisable to use rubber gloves or throw-away polythene gloves. When rubber gloves have been used wash them immediately after use, and whilst still on the hands, using running water. If the hands have been used for mixing or manipulating Milliput wash them immediately after use with toilet soap and warm water.

When casting or mouldmaking talc or a light oil can be used as a releasing agent.

Milliput products are resistant to frost, heat, solvents and most fuels.

Milliput will have a storage life of approximately 2 years providing it is stored in cool, dry conditions. Place unused epoxy putty in polythene bags and re-seal. Storage at high temperatures or high humidity may reduce shelf life.

We know customers have softened Milliput by placing it in a microwave on defrost for a few seconds (although this is a practice we could not endorse).

There are a number of ways of colouring Milliput.

Different colours can be obtain by cross-mixing or blending from the range of colours that Milliput is available in.

Powder pigment can be mixed in, in small quantities, so that the mixture does not become too dry and crumbly. Strong powder pigment rather than powder paint is better as smaller amounts can be used.

Liquid colourings, like enamel paints, oil paints, spirit based-dyes or pigments can also be used to colour Milliput, but liquids or pastes may be difficult to introduce into the putty, again small quantities should be used, to avoid creating a very wet mix that may be difficult to mix.

In all cases the Milliput should be thoroughly mixed by rolling & folding about 30-35 times. This will ensure that all the hardener has come in good contact with the resin and the Milliput will then set correctly.

If you are interrupted while you are mixing Milliput, you can put the Milliput into a deep freezer until you can get back to work. This will keep the product at approximately the same state of setting at which it was frozen for up to 36 hours. Simply remove the now frozen product from the freezer and warm in the hand and it is ready to use. If stored immediately on mixing it retains its sticky nature.

Disclaimer: The information in these articles is given in good faith and is based on our own experience but no warranty, express or implied is given as we have no control over the final usage of our product.