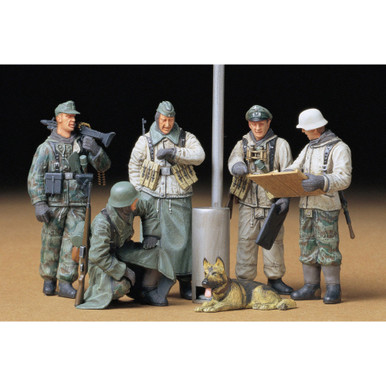 German Soldiers at Field Briefing
This set depicts German soldiers from the middle stages of WWII in a variety of poses wearing winter uniforms and overcoats standing around a stove discussing battle strategies. Set includes five figures depicting an officer and a noncommissioned officer looking over an open map, a soldier looking at his watch, another carrying a MG42 machine gun on his shoulder, and a squatting soldier. Also included in the set is a German Shepard figure lying down and accessories such as a newspaper and magazine. Combining this set with other winter themed dioramas would be enjoyable.