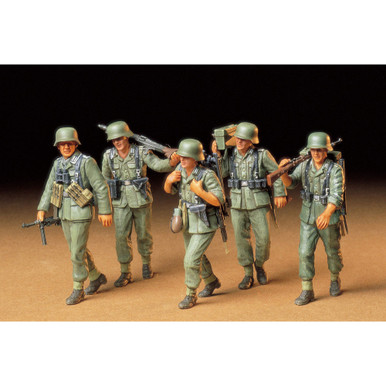 German Machine Gun Crew On Maneuver
This is a plastic assembly model kit of a WWII German machine gun crew. Models are depicted wearing M43 field uniforms and boots with leggings as seen on German soldiers from 1943. This five figure set features a noncommissioned officer carrying an MP40 submachine gun in his hand, three soldiers carrying ammunition cases and a tri-pod gun mount respectively, and the machine gunner with a MG42 machine gun on his shoulder. The set includes sharply detailed parts to depict equipment such as MG42 and MG34 machine guns, tripod, and poncho's. Combine this set with tanks and other vehicles belonging to the German army for a wider scale diorama.