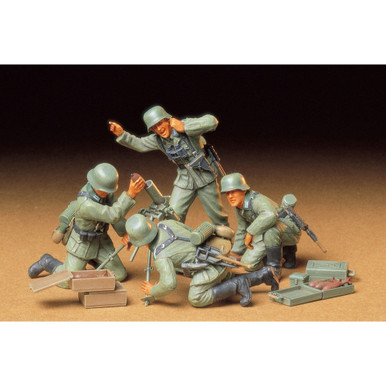 German Infantry Mortar Team
During WWII, the German infantry were issued with the precise 8cm GrW 34 mortar. This plastic assembly model kit realistically depicts a German infantry mortar team beginning to fire the weapon with two soldiers holding it down, one loading it, and one yelling "fire!"Â The 8cm GrW 34 mortar can also be depicted in an unassembled state for when it is not in use. Further enrichening the kit are parts to depict wooden and metal ammunition cases (two each) as well as mortar shells.